Why does our combined sewer system overflow?
Eighty-five percent of the time, Lancaster City’s one wastewater treatment plant is able to manage and clean the volume of wastewater flowing through this combined system.  However, during rainstorms and other wet weather events, the system becomes overwhelmed and the untreated combined sewage flows into the river. These events are referred to as combined sewer overflows (CSOs).

How much water overflows?
About 750 millions gallons of polluted water overflows into the Conestoga River each year.  Eighty-five percent of the time, the City’s Advanced Wastewater Treatment Facility is able to manage and clean the volume of water flowing through this combined system.

Why must the City work to eliminate its combined sewer overflows?
There is a renewed focus on cleaning up local waterways—like the Conestoga River—that fail to meet water quality standards and contribute pollution to the Chesapeake Bay.  The Environmental Protection Agency, for example, has begun enforcing limits on nitrogen, phosphorous and sediment pollution, referred to as a Total Maximum Daily Load (TMDL).  The TMDL or “pollution diet” requires all communities located within the 64,000 square mile Chesapeake Bay watershed to ensure that cleanup commitments are kept.  These requirements apply to communities with combined sewer systems and separated systems.

What is the City doing about this problem?
The City of Lancaster is doing two things:

Why did the City create a green infrastructure plan?
The City of Lancaster comprises 7.34 square miles and includes 241 acres of publicly-owned park land and playgrounds, 135 miles of streets of which 27 miles are classified as alleys, and over 860 acres of buildings.  As with most cities, it is largely paved over with buildings, roads, parking lots, sidewalks, and other hardscaping features. 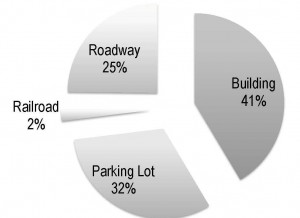 What is impervious surface?
Any surface that water cannot soak into.  Examples include asphalt (e.g., streets), concrete (e.g., sidewalks) and rooftops.  When water can not soak into the ground, it either sits in one place forming a puddle or it moves along to a place it can soak into the ground or be collected.  In the City of Lancaster, most of the rain water is captured in one of the City’s 2,000 storm drains.  As water moves along streets, sidewalks and other impervious surfaces it carries with it garbage, oil and other automobile fluids, fertilizer, salt and pet waste.

What is the difference between gray infrastructure and green infrastructure?
Gray infrastructure is a man-made system essential in every community that includes sewer and wastewater facilities.  These systems generally require energy to operate and are often quite expensive to build and maintain over time.

Green infrastructure, in contrast, employs natural systems to manage rainwater where it falls, allowing water to soak into the ground, evaporate into the air or collect in a rain barrel or cistern.  Thereby using natural systems (such as the ground) to essentially do the treatment of this rainwater rather than expensive gray systems built by man.  There are many types of green infrastructure technologies. These include tree canopies, native shrubs, green roofs, rain gardens, porous pavement, rain barrels and cisterns.

Environmental
The most obvious benefit is environmental.  Green infrastructure:

Social
Living and working in and around significant green space has positive social effects including:

What is the estimated cost of the City’s green infrastructure plan?

Below is a summary of the GI Plan benefits and estimated costs.  For more information, please see the City’s Green Infrastructure Plan.

*This does not fully consider the ongoing costs associated with planning and design, maintenance, public education, administration of ordinances or implications of the Chesapeake Bay Watershed Implementation Plan and further EPA regulations.